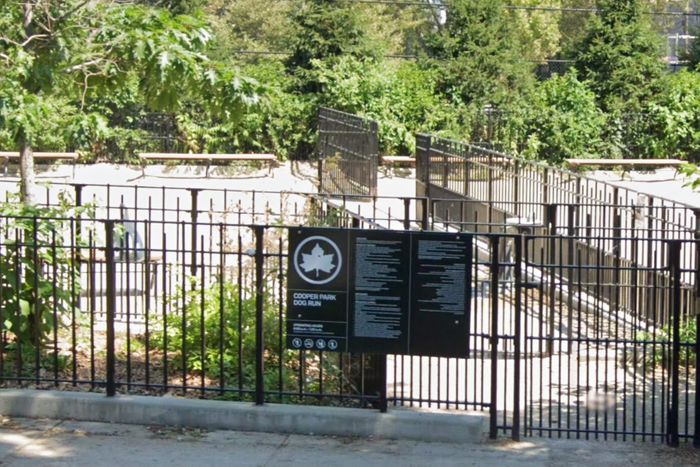 Is the playground, in essence, a dog run for children? Should the laws of the park — spoken and unspoken — govern it as such? This is the ethical question posed this week by a dog owner in a NextDoor thread that, as you might imagine, quickly went off the rails. The original poster was angry because she claimed “a guy” came up to her and other dog owners on the main lawn of East Williamsburg’s Cooper Park saying that the space “should only be used for children and that dogs should be restricted to the disgusting dog park.”

“Well, my response to that is, the children have a designated playground/jungle gym area as well,” she went on. “Perhaps they should be restricted to that space.”

Neighbors — dog owners and parents alike — then weighed in, mostly criticizing the original poster and deferring to Cooper Park’s existing dog rules, which require dogs to be leashed unless they’re in the (possibly disgusting) dog run. “Do you think it is fair for kids to play in spaces where dogs pee and poop??” one person asked. In another post, that same person helpfully (if somewhat misleadingly) added: “Kids don’t pee and poop on the grass nor anywhere!” Another person, who noted they have both kids and a dog, wrote, “If you want to stay in NYC with a dog, respect the rules and deal with it.” One poster sadly recounted the birthday parties he had held for his children in the park: “Unfortunately those times ended after we set up camp and my kids and my guests ended up laying in residual dog poop.”

Near the bottom of the thread, someone chimes in with a plea: “There has to be some way we can compromise.” No one has replied.