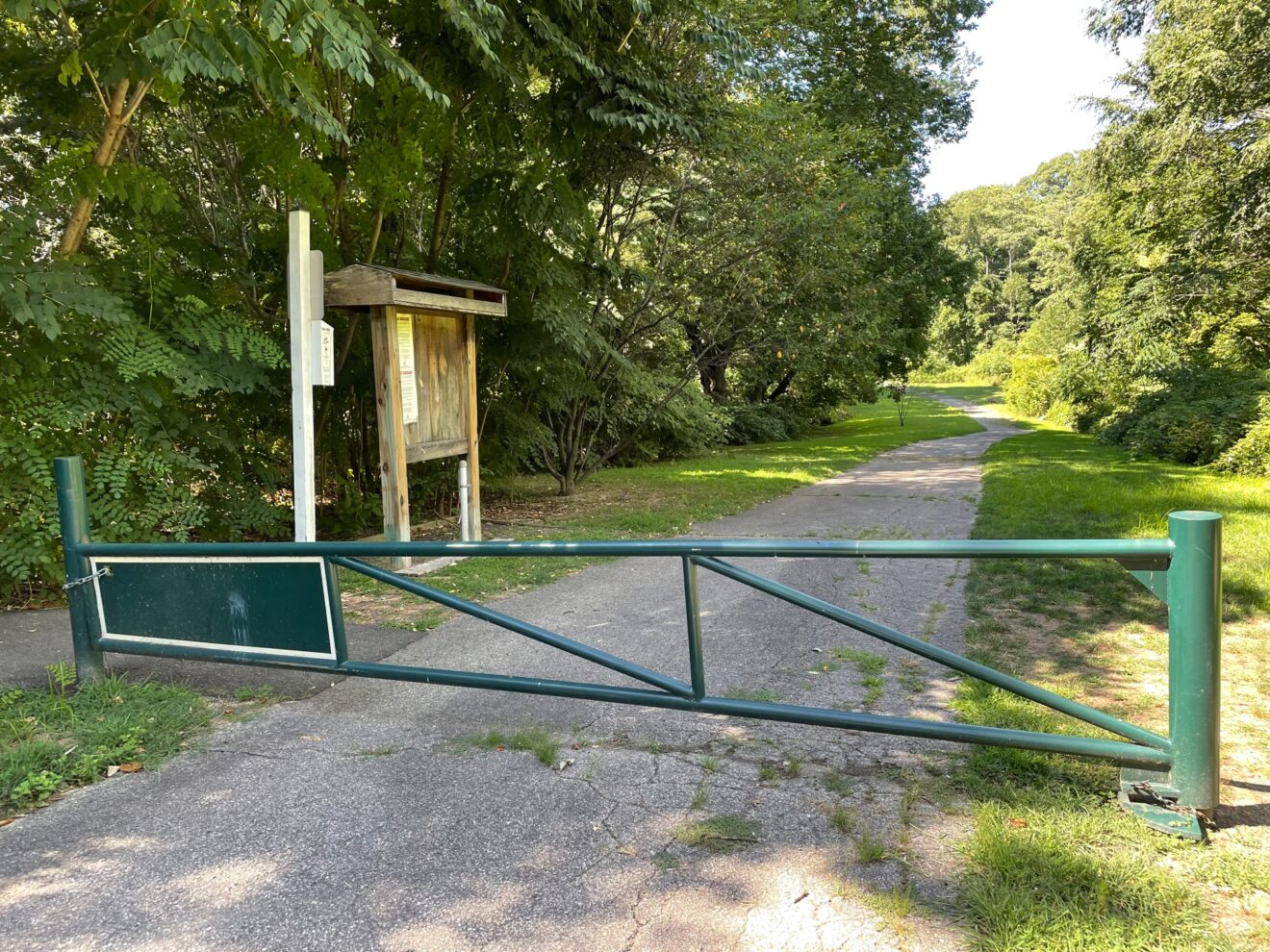 In a dense, noisy, high-traffic commercial section of Stamford’s West Side neighborhood, where grass and trees are scarce, Rosa Hartman Park offers respite.

But Stamford residents have largely ignored it.

The park is 14 wooded acres donated to Stamford in 1955 by real estate developer Jesse Hartman, who named it for his mother. In decades past, the park on the Greenwich border had a pavilion, barbecue grills, tables and benches – a cool, green spot for summer picnics, and a year-round destination for hikers and nature-watchers.

Then it became a destination for illegal dumpers, drug users and homeless people. It was an overgrown mess piled with discarded mattresses, furniture, car tires, and construction debris until former Mayor Michael Pavia cleaned it up in 2013.

It still needs work, but Stamford has mostly forgotten it.

Greenwich, however, has not.

Greenwich officials have long been interested in Stamford’s Rosa Hartman Park, which abuts Laddin’s Rock Sanctuary, 18 acres of forest that Greenwich purchased for $4.8 million in 1989.

In 1999, then-Mayor Dannel Malloy got behind a proposal from a private company that wanted to build a driving range, miniature golf courses, batting cages and other amenities in Rosa Hartman Park.

Minutes from the June 1999 Greenwich Representative Town Meeting show that the town had filed an appeal in state Superior Court seeking to reverse decisions by Stamford boards to permit development of the recreational facility.

“The basis of the court appeal is the protection of Greenwich’s public resources, including watercourses and wetlands,” the minutes read. “With this resolution, the citizens of Greenwich will respectfully request that the City of Stamford reconsider this proposal.”

Stamford officials dropped the proposal, though not because Greenwich requested it.

In 2004, Greenwich residents were getting nowhere with a quest to build a dog park in their town. Lots of people wanted a dog park, but nobody wanted it in their neighborhood, The Advocate reported at the time.

Malloy, who later became governor, was still mayor at the time.

“It’s certainly not our intention … to advertise for people from Greenwich to come walk their dogs in Stamford,” Malloy was quoted as saying. The talk around city hall was that, behind the scenes, Malloy, who was born and raised in Stamford, was more indignant, saying Stamford is not where Greenwich dogs come to (stronger word for “poop.”)

So that didn’t happen.

Now the idea of a shared dog park at Rosa Hartman has surfaced again.

Greenwich First Selectman Fred Camillo said he has raised it with current Stamford Mayor Caroline Simmons, who was born and raised in Greenwich.

“I asked Mayor Simmons if she liked the idea of a dog park, and she did,” Camillo said this week. “If we develop private partnerships to put up fencing, and piping to provide running water, it will mean less that Stamford or Greenwich has to spend. I am reaching out to landscaping companies that may be interested. That’s where we left it.”

Each town now has its own dog park, but demand has increased.

Simmons’ spokeswoman, Lauren Meyer, said in an email that the discussion with Camillo was preliminary.

“At this time, there are no formal or imminent plans for a dog park in Rosa Hartman Park,” Meyer wrote. “A potential dog park was just one of many ideas that Mayor Simmons and First Selectman Camillo discussed when they met.”

But it could be that the 400-year history of Rosa Hartman Park and Laddin’s Rock Sanctuary will keep the land from going to the dogs.

That gets to the real reason Stamford did not go forward with batting cages and mini-golf courses in Rosa Hartman Park after they were proposed in 1999.

According to a March 21, 2000 letter unearthed by Kathleen O’Farrell, a volunteer in the library at the Stamford History Center, the State Historic Preservation Office notified Malloy that “Native American burials have been accidentally unearthed in immediate proximity to the Rosa Hartman Park-Laddin’s Rock Sanctuary over the last 50 years. This office reasonably believes that additional unmarked Native American burials may exist at the Rosa Hartman Park-Laddin’s Rock Sanctuary and could therefore be disturbed or destroyed by ground-disturbing activities that are related to proposed park improvements.”

The letter “strongly encouraged” the city “to immediately consult with the Office of the State Archaeologist at the University of Connecticut,” in accordance with state law. It recommended that the city undertake a survey “to identify and evaluate prehistoric and historic archaeological resources that may exist” at the site.

Catherine Labadia, deputy state historic preservation officer and staff archaeologist with the Connecticut Historic Preservation Office, said this week that there are “known archaeological sites within and adjacent to” Rosa Hartman Park.

City Rep. Jennifer Matheny, chair of the Board of Representatives’ Parks and Recreation Committee, said Friday she had not heard of the idea of a shared Rosa Hartman dog park.

“Any type of partnership would have to go through the proper approvals,” Matheny said.

Paul Newman, who chairs the Parks and Recreation Commission, which sets policy for public parks, said the city has put out a request for proposals from companies qualified to develop a strategic plan for Stamford parks. Responses are due at the end of the summer, Newman said.

“A vision for Rosa Hartman Park is to be included in the plan, so right now there is no movement toward doing anything, as far as the commission knows,” Newman said. “I can say that we don’t want to lose any green space anywhere in the city, especially south of I-95.”

Stamford has one dog park on Courtland Avenue, but it isn’t enough, he said.

“The number of rentals in Stamford is on the increase, and most apartments have a dog,” Newman said. “So there is a request and a need for another dog park.”