More than 100 dogs and cats find forever homes Saturday, including Bear, the dog who was stabbed last month – Lawrence Journal-World 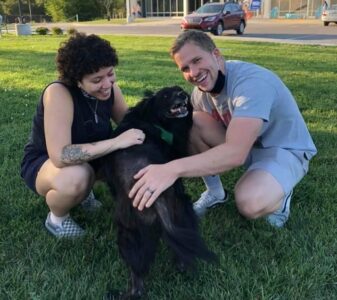 Although his adoption was not part of Clear the Shelter Day at the Lawrence Humane Society, Bear, a dog who was stabbed last month when his owner was attacked and killed, got to go home to his new family Saturday.

More than 100 animals at the Lawrence Humane Society were adopted Saturday and left the shelter for their new homes.

On Saturday, which was Clear the Shelter Day across the nation, all adoption fees were waived for dogs and cats.

A family shows off the black and white cat they adopted as part of Clear the Shelter Day Saturday, Sept. 18, 2021, at the Lawrence Humane Society.

In Lawrence, 102 animals were adopted, according to Elina Alterman, the shelter’s development and communications director. That includes 47 dogs and 55 cats — the first time more cats than dogs have been adopted in Clear the Shelter Day’s seven-year run in Lawrence, she said.

The usual adoption fees in Lawrence for dogs are around $150 for adults and $250 for puppies. Cat adoptions typically are in the $60 range for adults and $100 for kittens. All of those fees were waived.

This is one of the 47 dogs who left the Lawrence Humane Society with a new family Saturday, Sept. 18, 2021, which was Clear the Shelter Day.

Alterman said Saturday was “long but rewarding.” The shelter wasn’t entirely cleared — it was hoping to adopt out 150 pets — “so we still have lots of wonderful animals available for adoption.” Though fees for the remaining animals won’t be waived, Alterman said adopting from the shelter is still a “great deal,” noting that all adopted animals are spayed/neutered, vaccinated and microchipped at no cost to the adopter.

Of special meaning to the shelter staff was that Bear, a dog who came to the shelter in August after his owner, Daniel Evan Brooks, was stabbed to death, also went to a new home Saturday. Bear’s adoption was already in the works before Clear the Shelter Day, but Saturday just happened to be his lucky day to start his new life. He was adopted by Brooks’ brother, Alterman said.

Bear, likely around 12 years old, was stabbed when his owner was attacked and killed in the parking lot of a Lawrence grocery store. After the incident, Bear was cared for at the shelter and Clinton Parkway Animal Hospital. The man suspected in the attack is facing charges of murder and cruelty to animals, as the Journal-World has reported.

At the time of the incident, the shelter had said that Bear’s “prognosis is good and we believe there are happy days ahead for this sweet senior gentleman.”

A sign displays the names of the 102 cats and dogs that were adopted Saturday, Sept. 18, 2021, at the Lawrence Humane Society.

The Lawrence Humane Society adopted out 102 cats and dogs Saturday, Sept. 18, 2021, during its annual Clear the Shelter Day.