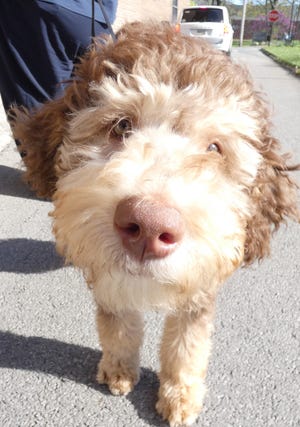 For almost two years, Ellie the bloodhound has been the Bucyrus Police Department’s only K-9 officer.

That’s about to change.

A new drug detection dog, a Belgian Malinois whose name is being kept a secret for now, will be introduced by the department soon, Bucyrus police Chief Neil Assenheimer said. The department also recently added Charlie, a double doodle — a hybrid of golden retriever and standard poodle. He’ll serve as a therapy dog, aiding both crime victims and the department’s officers.

After arriving, the new drug dog will spend some time bonding with its handler, Officer Devin Wireman. Then it will be time to start training together.

The dog already has been trained, Assenheimer said — but Wireman will need to catch up. The new team is expected to be certified in the first week of June.

One of the department’s cruisers already has been outfitted for the new K-9 unit, he said.

Charlie is ‘very much a puppy’

Dispatcher Cindy Barth suggested the addition of a therapy dog to the department, and now she’s working with Charlie to get him certified as a therapy dog, Assenheimer said.

“Right now he just kind of runs around the department,” the chief said. “There’s not too many people who are mad when they’re petting a dog, you know. He’s very friendly.”

Wellness is something that’s being stressed in the law-enforcement field right now, he said, and many departments are adding therapy dogs.

At just about 17 weeks old, Charlie is still “very much a puppy,” Barth said. When full grown, he’s expected to weigh 60 to 80 pounds

He’ll attend a weeklong training program in Franklin County, where he’ll be trained for certification through the Alliance of Therapy Dogs and to become a Canine Good Citizen.

“He will be trained to sit for long periods of time to be with victims, and to be in different environments that he is not used to,” Barth said.

Barth said she became aware of the benefits of therapy dogs after her husband encountered one at his job.

“I felt there was a need for it here,” she said. “I don’t think there’s any therapy dogs in law enforcement in our county, so it was just kind of something that I felt was needed.”

She said she’s been in contact with departments in Franklin County where therapy dogs are used every day, either for officer wellness or helping crime victims.

“He’s a lover, for the most part,” she said of the golden-furred puppy, which was purchased through the department’s K-9 fund.

“A lot of people have asked why we didn’t go to the humane society,” Barth said. “There’s a very specific demeanor and a very specific characteristic that they look for in a therapy dog — and it’s not that you can’t find them at a shelter, but they’re harder to find at a shelter. The dogs have a lot more trauma and stuff at the shelter.”

Also, it sometimes can be difficult to find a puppy at the shelter.

“We were also looking for something that didn’t shed — he’s not supposed to shed,” Barth said. “And specifically, the doodles are hypoallergenic … we don’t want him to not be able to help a victim.”

Charlie is expected to complete his training sometime after the first of the year. Until then, he gets to hang out at the police department a lot.

“It’s been amazing, just the support from the officers, always checking in to make sure the dog doesn’t need anything, make sure he doesn’t need to go out. That kind of thing,” Barth said.

Ellie, the department’s bloodhound, has been busy too, Assenheimer noted. She tracked down a man who had been involved in a domestic incident a few weeks ago.

“We’re very happy to hear that,” he said.

The department is always raising money for the K-9 fund, which also covers everyday expenses such as food and veterinary care, Assenheimer said. Plush toys representing Ellie and Harvey are still available at the department.