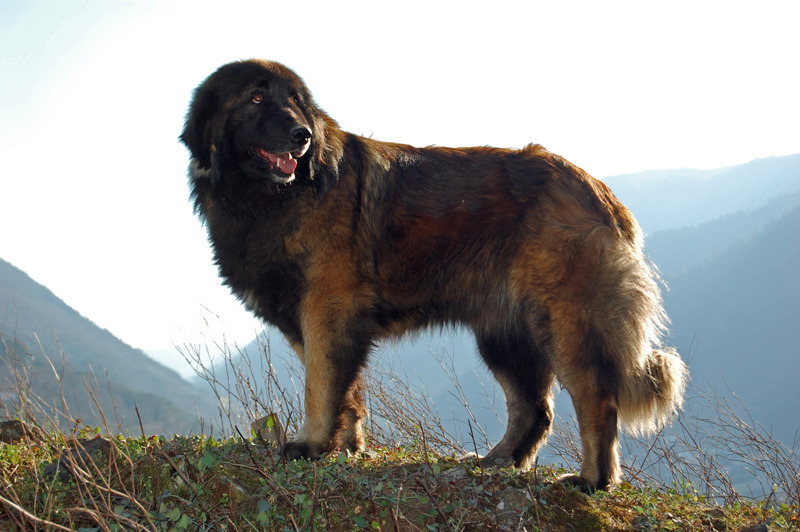 It is a purebred dog hailing from the Estrela Mountains of Portugal. These dogs are courageous, loyal, and protective. The Estrela Mountain Dogs are also called Portuguese Shepherd and Cao da Serra da Estrela. These beautiful dogs are quite large that is why it is suitable to keep them in large houses that have large yards where they can roam and enjoy. Apartments are not ideal to keep these dogs. These dogs are very loyal and protective, that’s why if you want a loving companion that will take care of the safety of your home and your family then this adorable dog is the right choice for you.

These are considered one of the oldest breeds in Portugal. They have been protecting houses and flocks of sheep for so many centuries. They are considered loyal and intelligent. Their ancestors were herd-guarding dogs in Serra da Estrela which are now considered as a part of Portugal. By the 19th century, estate dogs replaced them and their number began to fall.  At the beginning of the 19th century, certain special shows were conducted to promote the preservation of Estrela breed in that region. At last, the first official breed standard was established in 1993. After World War 2 the interest of dog breeders returns towards this breed. They were represented in dog shows then. In the 1970s, the interest of people inclined again. Lastly, the revolution in Portugal brings back the dog with many other changes in society. Now the dog can be found in many countries of the world, mainly in the UK.

It is a fairly large dog with impressive height and build. On average, the weight fluctuates between 66 to 110 pounds. Their heads have a round skull. They eyelids, nose, lips, and roof of the mouth are dark pigmented. Eyes are oval-shaped and medium in size. They have two types of coats, one is short and the other is long. The color of the coat is mostly fawn yellow, or wolf gray but the predominant coat colors are fawns, brindle, and wolf gray. These dogs have droopy hair and long bushy tail.

The hair of Estrela does not get tangled that easily with the exception of the hair behind the ears. However, their lovely coat requires deep brushing once a week. They like to roam in large spaces and apartments are not an ideal place to keep them. They can live happily in a large and fenced yard. Estrela Mountain Dog has an average life span of 12 to 16 years. It is a rough and tough breed that is considered a healthy and active species of dogs. They have tendencies of developing hip and elbow dysplasia, so special care is needed in this regard.

There are certain inherited illnesses that are associated with this species. While purchasing a new puppy of this species, don’t forget to get the parents checked for following congenital diseases.

Heart failure is the most common cause of death in large breeds of dogs. Estrela is also highly prone to this illness. It affects the Estrelas of young to middle-aged adults. Common symptoms are abdominal swelling, coughing, shortness of breath, and coughing. This disease leads to the weakening of muscles of walls of the heart which prevents the normal flow of blood around the body. It also causes congestion of fluids in the abdomen and lungs in the body. X-ray, ultrasound scanning, and electrocardiography help in the diagnosis of this disease. This disease is not curable in most of the cases, only a few succeed to tackle this with some specific medications.

This disease causes malformation of elbow joints. Symptoms include lameness, stiffness, and pain in the elbow which can be seen in puppies as early as puppies of four months. The diagnosis is confirmed through x-ray. It can be treated by using pain relievers and different nutritional supplements and in some cases, surgery is done. The activities of such dogs are restricted throughout their lives.

It is a congenital disorder. Parents with good hips are not likely to produce pups with this abnormality. Just like elbow dysplasia, hip dysplasia is also confirmed with the help of an x-ray. Don’t purchase the pups of Estrela if the parents don’t have a health certificate.

These are calm pooches but never refrain from coming to the defense of their loved ones and that trait makes them an exceptional guard dog. They can be often disturbing to the stranger that is why they should be properly trained for socialization. As compared to their fellow pets, they are dominant in nature.

These dogs respond well to training activities. They are confident and energetic but independent and strong character can result in stubbornness in some cases. According to experienced dog trainers, it is very easy to train this adorable species. They assert their dominance on fellow pets and it is very important to give them socialization training otherwise they can be troublesome for strangers because of their alertness.

They do not need a lot of exercise. A light routine of walking and some exercise are fairly enough for these lovely and active pooches.  Moreover, if provided with adequate space, they will petrol for several hours. This habit keeps them active and healthy. It is preferable to keep in open spaces. Urban and dense settings are not suitable lace for these dogs to live.

Although, their lovely coat sheds heavily yet it doesn’t need a lot of work. Brushing once a week detangles all the knots and the puppy is good to go now. However, hair around the ears is prone to get tangled. Comb them every three days. Clip their dew claws and the dog can easily wander here and there.

They do not reproduce with any known and recognized cross-breeds.