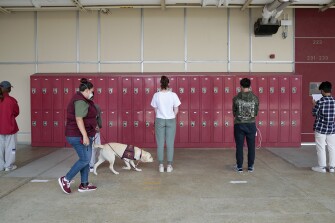 Alexia Ocampo had been counting the days until the prom. But first, she’d face the finely tuned noses of a pair of COVID-sniffing dogs.

In the two days before the May 6 dance, Ocampo and other students with tickets to the Mills High School’s prom would need to test negative for COVID-19. In the San Mateo Union High School District, a half hour’s drive south of San Francisco, that meant taking rapid-antigen tests and being sniffed by specially trained Labrador retrievers (as long as parents gave permission).

Students lined up in small groups, while yellow labs named Scarlett and Rizzo walked behind them, sniffing for the subtle odors bodies produce when they have COVID-19. The dogs are trained to sit if they detect the scent. Minutes later, Ocampo, a senior at Mills, was cleared to attend prom.

“Testing right before a big event that everyone’s been planning for is stressful,” she said. “I’m a big dog lover, so the dogs are a bit of a stress reliever. It takes your mind off it.”

Mark Menz, another senior at Mills High, said he was happy to get dog-sniffed and nose-swabbed if it means he can safely attend the prom. It’s his last chance: he graduates later this month. “It feels great,” he said. “I feel grateful we’re able to spend that time together.”

Since the dogs’ accuracy is still being studied, their alerts weren’t enough, on their own, to bar a Mills High student from the prom. School officials based those decisions on the results of rapid-antigen tests. But so far, the dogs’ track record is good: They’re almost as accurate as the quick swab tests, said Dr. Carol Glaser, who’s overseeing the pilot with medical detection dogs in her role as supervisor of the California Department of Public Health school antigen-testing program.

For Mills High students, dog-sniffing is just the latest in a barrage of changes the pandemic has brought to school life. Like millions of their peers nationally, they’ve had to learn from home, wear masks when they returned, and endure the cancellation of beloved high school events, from basketball games to formal dances.

How to manage COVID risk at end-of-year events

Now that proms are back at most schools, and COVID case numbers are slowly rising again, district leaders are grappling with how to minimize the risk of virus spread at those dances and other large-scale year-end events. The San Mateo district’s experience illustrates the challenges and choices many schools could face this spring.

It started with an outbreak. Nearly 100 of the 600 students who attended the district’s first prom this year, on April 9, came down with COVID-19. That one was test-and-mask optional. But the district pivoted immediately, requiring negative tests and indoor masks for proms at its six other high schools. They also added another layer of detection: Scarlett and Rizzo.

The two yellow labs are the stars of the pilot program run by the California Department of Public Health. With a $218,000 grant from the CDC Foundation, the department teamed up with the Association of Public Health Laboratories and Early Alert Canines, a Concord, Calif.-based company that trained the two dogs as COVID detectives. The pups now sniff for the virus in 17 elementary, middle, and high schools in the Bay Area.

Dogs have a long and familiar history as police partners, finding drugs, guns, or criminals. They locate and rescue people in trouble, and support people with disabilities. They’re also medical partners who can sense low blood sugar or ominous shifts in blood pressure.

During the pandemic, experts started training dogs to detect COVID-19, and dogs have been deployed at airports and concert venues to screen hundreds of people quickly. But COVID-sniffing dogs are still rare in K-12 schools. Some schools in Massachusetts have used them to pick up traces of the virus on surfaces, so they can be cleaned. A pilot program in Hawaii is using dogs to detect the virus in staff and students.

Kenneth Furton, a forensic chemistry expert who leads the study center at Florida International University that pioneered the training of COVID canines, said that a 2021 study of their first four pups showed that on average, they detected the virus accurately 97.5 percent of the time.

Handlers who have used the dogs to screen airline employees at the Miami airport have also found that the dogs can pick up the virus before it shows up on a PCR test, Furton said.

Early Alert Canines trains dogs to alert insulin-dependent diabetics to drops in their blood sugar. Last fall, they drew on that expertise to train Scarlett and Rizzo.

The trainers use a scent wheel, a big device with outward-reaching spokes, each with a canister at the end. Some canisters contain socks worn by COVID patients, some are empty, and some contain dog treats such as lunch meat or peanut butter, said Victoria Briskin, the company’s development director. Once the dogs learned to alert to the right scent, they were deployed to schools in early 2022, she said.

San Mateo Union already offers voluntary weekly rapid-antigen testing for students and staff, and requires it, in response to California law, for unvaccinated staff members. Adding Scarlett and Rizzo to the rotation provides the district with information that backstops rapid-test results, and eases the anxiety that can accompany testing during a spike in new cases, said Sara Devaney, the district’s health services manager.

“It’s really turned down the temperature for the kids, because they’re nervous,” Devaney said. “The emotional support they bring to the environment you just can’t describe.”

Hillsdale High School was the first school in the district to try the COVID dogs, before its prom on April 23. Jeff Gilbert, the principal, said he was a little nervous about how people would react. But he saw right away that the dogs brought more than scientific value to the screenings.

“People were interacting with them like pets,” he said. “They were drawing students over to them.”

The dogs returned the week after the Hillsdale High prom, and—together with rapid-testing—found 11 positive cases among attendees, Devaney said. Not all were necessarily infectious during the prom, but to be safe, the district contact-traced, including notifying all 540 students who’d attended, she said.

Data from the California pilot is still being assembled. But so far, from all 17 sites, researchers have gathered 1,800 sets of paired test results: one rapid-antigen and one dog-sniff, Glaser said. On average, the dogs are delivering a sensitivity rate—the ability to correctly detect COVID-19 when it’s present—of 83 percent, she said.

Rapid-antigen tests’ sensitivity ranges from 85 percent to 95 percent, said Mara Aspinall, an expert on COVID testing who is affiliated with Arizona State University.

If the dogs’ sensitivity rate rises over 90 percent, schools might be able to rely less on nasal-swab testing, using it primarily to confirm positive canine results. Dogs can screen large numbers of people more quickly—with less school staff involvement—than rapid-antigen screening programs, said Glaser, the physician overseeing the pilot. But for now, it’s still wise to use the two strategies in tandem, she said.

A few aspects of canine COVID testing are still thorny for K-12 schools. One is protecting the medical privacy of students or staff.

“I wouldn’t use the dogs on people,” said Joseph Baeta, the superintendent of the Norton, Mass., school district, which uses two dogs trained by the Bristol County Sheriff’s office to detect COVID-19 on tables, lockers, and other objects in its five schools. “It feels like a violation, like I’ve just announced their medical condition” in front of other people, he said.

The California pilot program addresses the privacy concern by having the dogs work a line of students from behind. That way, if the dog sits to alert for COVID, other students don’t know. In San Mateo Union, district leaders set up screenings so that students who’ve tested positive can be quietly channeled into a private area afterward to discuss their results, Devaney said.

“There needs to be a private space where you can handle positive cases,” she said. “There might be emotions. Kids might be devastated.”

Another way of protecting people’s privacy is to have dogs sniff a row of masks they’ve worn, instead of sniffing the people themselves, said Furton, of Florida International University. University trainers have held screenings where people take off their masks, hang them in a row on a rack, and go into another room to wait for results.

Tara Quirk Kohler, the superintendent in Fairhaven, Mass., another district that uses the Bristol County Sheriff’s COVID dogs to sniff out COVID-19 on objects, said medical privacy isn’t the only reason she wouldn’t use dogs on staff or students.

“I don’t think it’s a great way to operate a school,” she said. “We’re trying to maintain a level of safety for kids. I wouldn’t want them to feel like they’re the enemy, and they’re the problem.”

Having COVID-sniffing pups in her schools has been an asset, Kohler said, because their detection of the virus on surfaces has helped the district anticipate, and respond to, the rise and fall of case counts. It’s also been warmly received in her community, whether people are for or against mask requirements, she said.

“It’s been a win-win when people are very polarized,” Kohler said.