Water Intoxication In Dogs: How It Happens & Treatment Options For Homeostasis 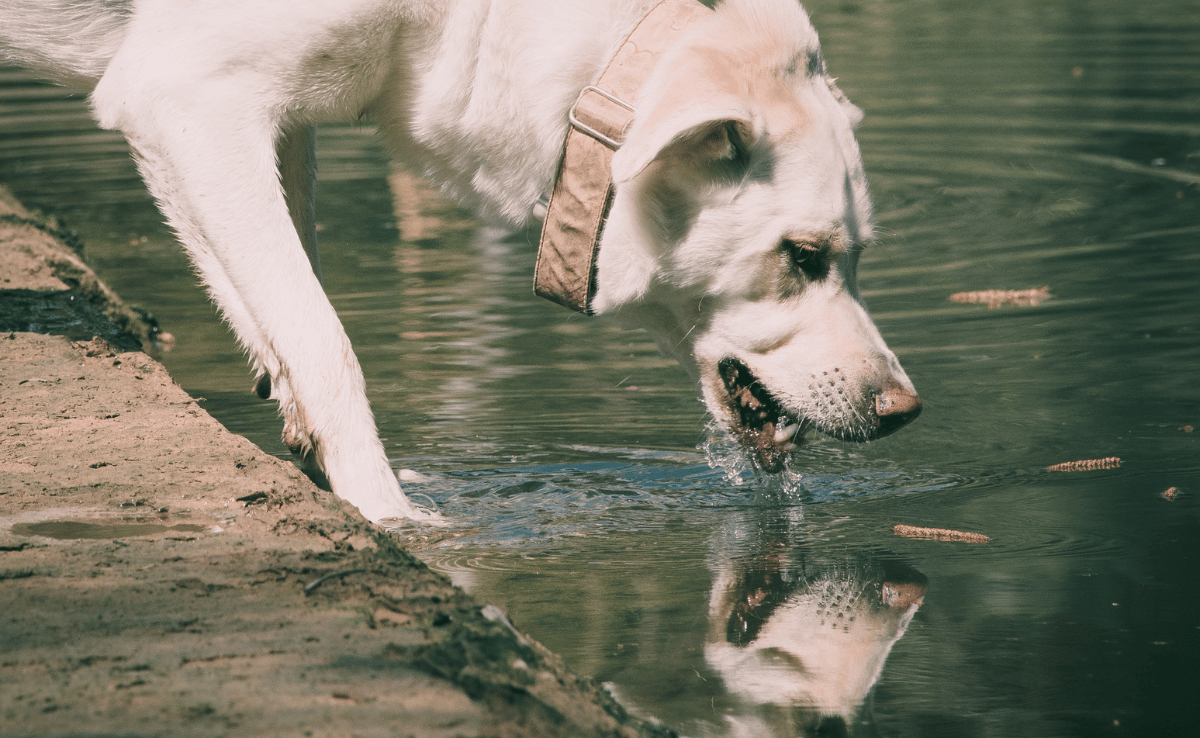 To keep the lights on, we receive affiliate commissions via some of our links. Our review process.

It was back in 700BC that a greek poet said, “Moderation is best in all things,”… and though it might come as a surprise to some, this is also true of drinking water! Indeed, for people and animals alike, drinking too much water too quickly can cause serious problems. From a medical standpoint, this is called water intoxication or “dilutional hyponatremia” and is perhaps more common than people think.  Find out more about what happens when dogs drink too much water and what to do if your dog has water intoxication.

To understand water intoxication, it can be helpful to first understand the concept of what is called “homeostasis.”

Homeostasis is essentially the ongoing self-regulating process by which the body maintains stability to function properly, constantly tweaking and adjusting to maintain balance. A big part of this process is how the body, mostly through the kidneys, maintains a steady level of water and electrolytes in the bloodstream. The main electrolyte involved in this process is sodium.

In people and dogs alike, the kidneys are very clever when it comes to adjusting water and sodium levels. Kidney specialists often joke that “you’re better off having one dumb kidney than two smart doctors!” Indeed, even when we throw our kidneys curveballs, such as exercising in the heat, eating a very salty meal, or drinking too much alcohol, they are usually able to quickly make things right again without too much help from us.

This being said, when it comes to dogs or people, taking in way too much water in one go can override the clever self-regulation mechanism and prove overwhelming, even for the smartest kidney. This is called water intoxication.

What Is Water Intoxication In Dogs?

Water intoxication is what happens when dogs drink too much water over the course of a few hours, causing a drastic and unsafe drop in sodium levels in the bloodstream. The body can cope with sodium levels changing to a certain extent, but the change needs to be gradual. When the water intake is massive and rapid, the kidneys don’t have the chance to do their job, and serious problems ensue.

How Does Water Intoxication In Dogs Happen?

Most cases of freshwater intoxication happen in the spring or summer, on a warm day when a dog is having fun and is exposed to lots of fresh water at the pool or on the beach. Though there is not a lot of literature on the subject, it is often noticed that the dogs most prone to this could perhaps be labeled as “drinking fools.” If you have one such dog, you probably know what we are talking about! These dogs will often excitedly drink water whenever they can, for example, swimming or chasing a ball in a lake or a river, or even the ultimate excitement: snapping at sprinklers.

What Happens When Dogs Drink Too Much Water?

Under normal circumstances, water and salt concentration inside the bloodstream roughly matches the water and salt concentration inside the cells. Freshwater has very little sodium in it. So when a dog drinks a massive amount of fresh water over a short period of time, at a rate higher than what the kidneys can eliminate, the blood is suddenly a lot more watery and dilute. Cells of the rest of the body, especially the brain, start behaving like sponges, sucking in water and swelling up. This is what actually starts causing the first signs of water intoxication in dogs.

In very mild cases, owners might simply notice their dog lethargic after swimming, then are back to normal after a few hours or the next day.

Symptoms of mild to moderate water toxicity are lethargy and listlessness, a distended abdomen, nausea, drooling, and vomiting. Dogs will usually also start urinating large amounts of clear urine at this point.

If the dog has stopped drinking water in time, the symptoms can stop there and stay mild, and the kidneys can, over time get rid of the excess water, slowly allowing the swelling of the brain cells to resolve. This would be considered a very close call, and these dogs should still be under close veterinary supervision throughout the process, as things can get worse in a hurry.

Indeed, brain swelling can worsen even hours after the dog is done drinking. Signs of more severe water intoxication progress rapidly to incoordination and weakness. Body temperature and heart rate can drop, and dogs can fall into a coma or start having seizures. This can happen very quickly, in a few short hours.

Can Dogs Die From Water Intoxication?

The consequences of drinking too much fresh water too quickly, can be catastrophic. Dogs who have started having seizures or fallen into a coma have so much brain swelling that they can stop breathing. To pull through, they need to go on a ventilator for several days. Even in the hands of the most experienced critical care vets, their prognosis can be very poor as the body tries to deal with the aftermath of severe water poisoning.

Treatment for water toxicity in dogs will mostly depend on severity. Let your vet know if you think there is a chance your dog has drunk too much water. They will likely need monitoring and to get several blood samples to keep an eye on sodium levels and other electrolytes. This can help decide whether they need to step up treatment, for example, by giving diuretics or sodium-rich fluids.

In cases of severe water intoxication, medication can be needed to control seizures, along with additional supportive care to try and buy time for the kidneys to figure out how to get rid of the excess water. This can even mean ventilator support for several days if a dog has stopped breathing because of brain swelling. The prognosis for dogs who come in with severe symptoms of water intoxication is usually poor, as the damage to the brain is sometimes irreversible.

What To Do If Your Dog Has Water Intoxication

The threshold of water toxicity in dogs will vary based on the size of the dog, how much water they end up drinking, and how quickly. The best thing to do if you suspect your dog drank too much water is to head to the vet as quickly as possible.

Perhaps a better question to ask, therefore, is what owners can do to prevent water intoxication altogether? Here are five things to look for:

What About Salt Water Intoxication?

Occasionally, the reverse problem of freshwater intoxication can happen if an enthusiastic dog decides to drink too much seawater. The saltiness of seawater is often enough to put dogs off from drinking too much of it, but just like with fresh water, some of our four-legged friends can still end up swallowing too much salt water while swimming or playing on the beach.

In this instance, sodium levels in the blood will rise quickly if the dog is not given enough fresh water to drink on the side. Signs of high blood sodium levels usually involve tremors and behavioral changes. While things can worsen if nothing is done, treating saltwater toxicity is often more straightforward. Owners can offer copious amounts of fresh water as they head over to the vets, and once there, the vet can usually give fluids, as well as warm water enemas in severe cases, to help bring the salt levels back to normal. The prognosis for these dogs tends to be a lot better than for dogs who have severe freshwater toxicity.

Stay Safe When Near Water

Though it is not extremely common, some dogs can get particularly enthusiastic about playing in the water and either willfully or accidentally end up drinking too much too quickly. This can lead to serious health problems. An ounce of prevention here is very much worth a pound of cure, and if in doubt, owners should not hesitate to head over to the vet if they feel their dog is unwell after potentially drinking a large amount of fresh water. And to help dogs from drinking too much water when swimming, you might consider a life vest for dogs. Also, be careful when they are swallowing lake or river water as it can cause giardia.