Why do Dogs roll in the Poop? How to stop him to roll in other stinky things? 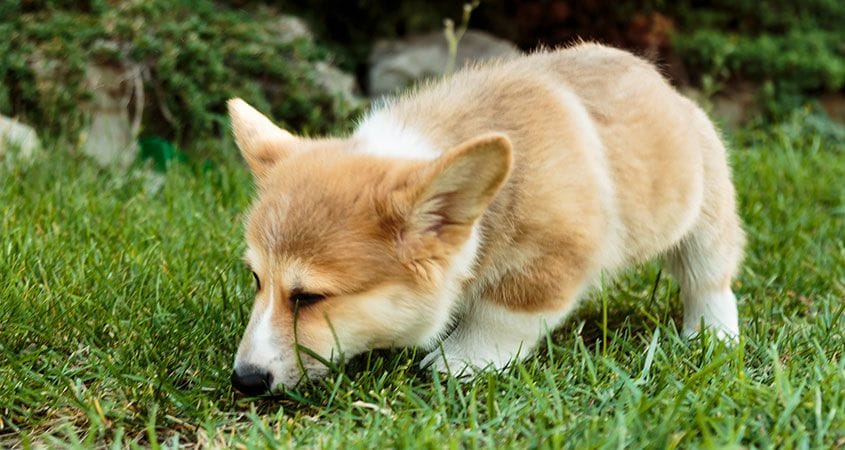 This world is strange, so are the dogs. Rolling on their poop and some other weird things like dead bodies of other animals is a common canine behavior and you must have witnessed it quite a lot of times while on a hiking or while walking in a park with your dog. A number of myths, theories, and scientific justifications revolve around as the reason behind this weird behavior of dogs. Keeping the smelly dogs around becomes difficult and it is worse when you are coming back from somewhere and the dog is present in the same car. This behavior is crazy if done by humans but for dogs, it is almost every day’s story.

Possible reasons for Dogs rolling on the Poop

Dogs are considered one of the territorial animals who like to mark their territory. By rolling over their poop and spreading it shows their intension to mark the area by their specific scent. This explanation cannot be taken under consideration as a foolproof reason for this behavior of dogs. However, the evolutionary process and habits support this argument.

One of the theory points towards the idea that rolling in their poop is that pet dogs try to hide their specific body scent. This is the same act that the wild ancestors of these dogs do in order to overcome and hide their specific smell so that the deer cannot run from smelling them from a long distance.

A simple reason established by dog behavior experts and maybe some lazy ones that dogs do this specific activity just because they are bored and in order to get rid of that boredom they rolled themselves in their own poop or in some other weird and pungent smelly and dirty objects.

The active ancestors of your dog used to live in the wild and they had to catch prey for their food because humans were not giving them food in kibble three times a day. In order to keep their prey (such as rabbits, deer, or other small animals) unaware of their presence to launch a successful attack, they hid their specific scent in the smell of other weird things including their own poop.

According to some experts, dogs roll themselves in smelly and messy stuff in order to stay connected to their buddies.  A research facility in Indiana gave this theory and the reason can be group hunting most probably. It is noted that dogs and wolf follow each other on specific scent patterns in their surroundings.

What to do about this behavior of dogs?

This behavior is not acceptable for most of the humans and unbearable by other humans. It leads to more number of baths that you give to your dog. In addition to that, it makes the whole house filled with a pungent smell and the house starts giving the dirty vibes. We are giving some recommendations below to deal with this problem related to canine behavior.

Teaching the dog not to mess with the poop:

Train your dog about leaving the poop alone and don’t touch it. Teach him the “leave it” signal. Be attentive towards the dog and stay with the dog until he agrees to leave that stuff.

Keep the dog around you on walks:

Whenever you go on a walk, keep your dog in your eyes range. This will help you in hushing him from meddling with the poop. Another way is to, wrap the collar belt of your dogs around the wrist and don’t let your puppy go closer to any dirty stuff.

Pick and throw away the poop:

Another useful and quick trick is to get rid of the dog’s poop as soon as possible. Don’t let your dog know about the whereabouts of that “trash site” where you are dumping the poop.

Is dog poop dangerous for humans?

Dog poop contains a lot of bacteria (E. Coli, Salmonellosis, campylobacter, and Yersiniosis) and parasite (Cyclospora, Cryptosporidium, roundworms, tapeworms, and Toxoplasmosis) which can cause multiple diseases in humans. Be careful from the dogs when it has got poop all over its body as it carries the risk of causing multiple diseases in humans.

What to do when the dog is finished rolling on the poop or any other filthy stuff?

It is a high possibility that a pungent and sharp smell will follow the dog after “the activity”. Now is the time to give a thorough bath to your dog. Follow the below-given guidelines in that regard:

Nobody appreciates filth. Having a dog massaged with poop around you is an unbearable situation. But this habit is with dogs since day one. Dog behavior experts have given different theories and scientific reasons behind such behavior of dogs such as evolutional traces and ancestral habits. Moreover, this behavior is also studied by the lens of related animals such as wolves. Habits between these quite the same animals are also judges and the result are quite the same. Teach your dogs slowly and gradually about staying away from the poop and other filthy materials, till then hold a tight grip on the collar belt of the dog.