It is very hard for the pet parent to see the pet dog in pain. It feels as if you are yourself going through the agonizing pain.

The following are some signs that will indicate that your dog is in some kind of pain.

2. Can I give over the counter medicines to my dog? 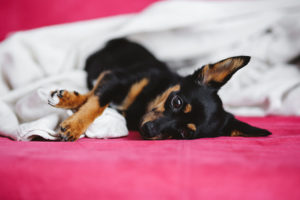 It is not advised to give these over the counter medicines to your pooch. these medicines are categorized as non- steroidal anti-inflammatory drugs (NSAIDs) which comprise aspirin, Ibuprofen, and Naproxen. NSAIDs are known as pain relievers. However, human NSAIDs are not at all safe for your dog. These drugs inhibit the enzyme cyclooxygenase which produces the inflammation-causing prostaglandins. However, the latter is important in a certain amount in the body to ensure proper blow to the kidneys and proper clotting of blood. Overproduction of prostaglandins can cause devastating effects on your dog’s body. There are few NSAIDs which are meant for dogs such as:

The above medicines can be given to your pup in pain only after prescribed by the veterinarian.

3. What problems can occur if my dog eats NSAIDs?

The below mentioned are a few problems your pup may face after administering NSAIDs:

4. What are the harmful effects of medicines for dogs?

Every medicine in the universe has some kind of side effects. It is important to keep your furry fellow in supervision after giving him any medication. Some of the side effects you should be careful about are mentioned below:

Besides, you can always read the leaflet of the medicine prescribed by the veterinarian. This will tell you about the potential side effects of that specific medicine.

5. Can human painkillers be given to dogs?

You should not try to give human over the counter pain killers to your dog. Some human medicines are toxic for dogs such as Ibuprofen and naproxen. Other medicines like paracetamol can also be dangerous if given in high dosage.

6. Can my dog eat aspirin as a painkiller?

Sometimes veterinarians prescribe aspirin to your pets if they suffer from osteoarthritis or musculoskeletal inflammation. Stomach ulcers can be caused when a smaller amount is administered while an overdose of aspirin can result in salicylate poisoning which eventually leads to coma, seizures, hemorrhage, and death. Aspirin with a coat is good and can be added to the dog’s daily meal.

8. Can my dog eat paracetamol as a painkiller?

It is not suggested to give your dog paracetamol unless prescribed by the doctor. The reason is paracetamol can be highly toxic if administered the wrong dosage. If your dog is in pain, straight away take him to the vet. He knows better what to prescribed and what amount should be administered.

9. How to relieve my dog’s pain using herbs?

If your pet is in real pain, try out the following herbs which are effective with no side effects.

Devils claw is an African plant which has strong anti-inflammatory properties. It is considered to be a body tonic. Devil’s claw is also fruitful to relieve muscle pain like spayed relief in your dog and arthritis.

It is our instinct to heal our pet if he is in pain. But, before giving any type of medication to your furry fellow, it is highly recommended to consult a veterinarian since painkillers have their side effects. Avoid giving over counter painkillers to relieve pain in your dog as they can exhibit adverse effects rather than relieving pain or inflammation. If your pet shows signs like loss of appetite, panting, low energy level, restlessness, immediately take him to the vet who will prescribe medicines according to the weight and age of the dog.