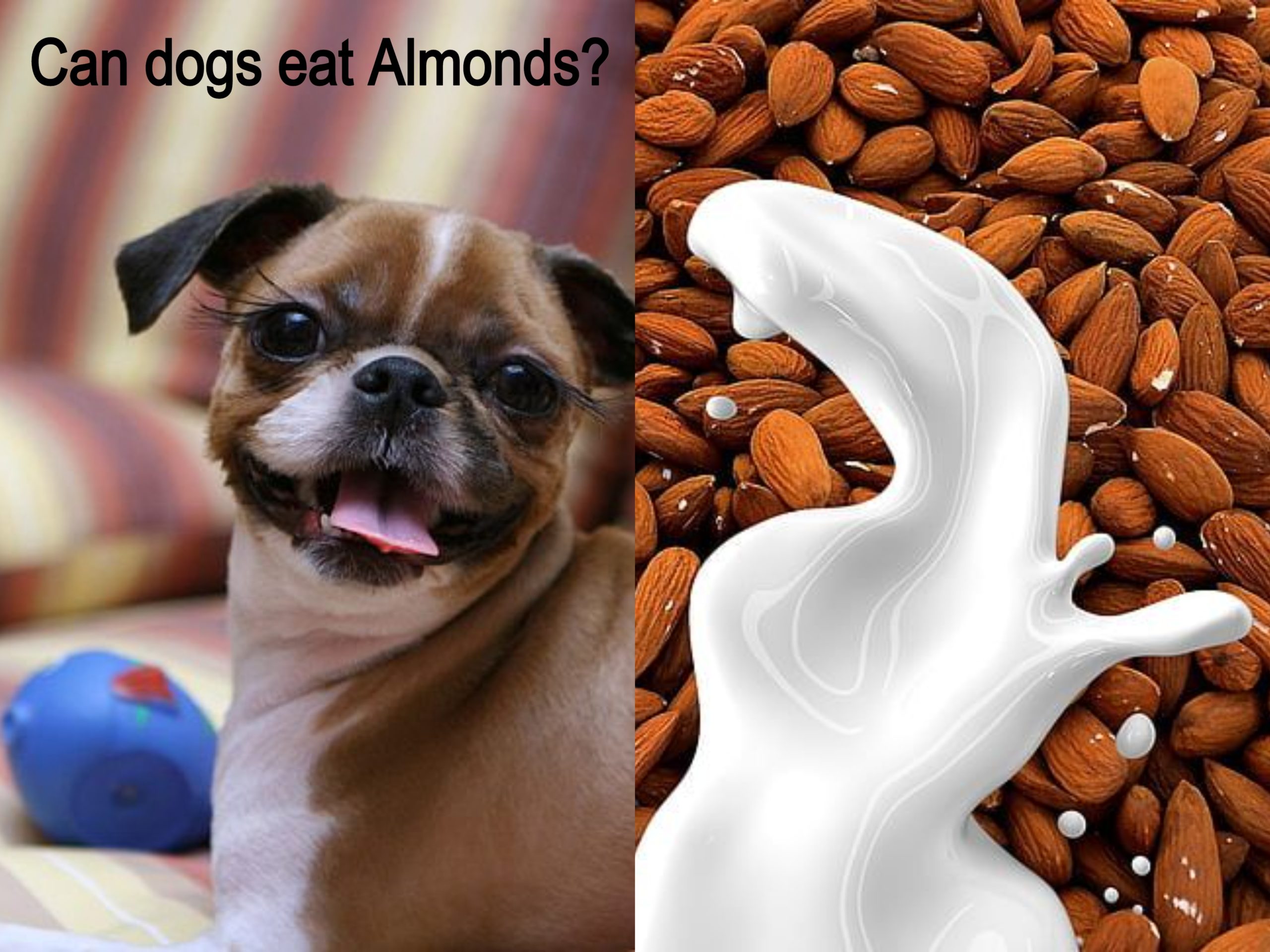 Almonds are known to have numerous health benefits. They are considered to be a healthy snack for your dog too.

Negative effects of almonds on dogs:

It is important to keep the digestive system of your dog under consideration before asking Can dogs eat almonds? This is because almonds can be difficult to digest. A handful of almonds wouldn’t make a huge difference. However, his digestive system will be extra burdened and will struggle to function normally.

Since our canine has the majority of the teeth which are used for crushing and ripping, it does not chew the food rather swallows it. This may lead to serious obstruction within the windpipe which may be fatal for your pup. Small breeds are more vulnerable than others.

These nuts like almonds and pistachios are high in fat content and can result in pancreatitis. It is the inflammation of the pancreas. There are various symptoms of the pancreas such as vomiting, loss of appetite, diarrhea, etc. it is recommended to treat pancreatitis aggressively since it can take your dog’s life if delayed or neglected.

Dogs are fond of almonds because of its tangy taste. Those varieties which are floured like smoked almonds, roasted almonds, barbecue, etc. some packaged almonds are quite rich in salt which is very unhealthy and causes salt toxicity and water retention in theses furry fellows. Your pup feels thirsty most of the time. dogs that are already dealing with heart ailments are said to be at high risk if they have water retention. Besides, it causes other kidney issues leading to other renal problems.

Since nuts such as almonds are a rich source of phosphorous, they tend to increase the risk of kidney and bladder stones in the body. Both are very painful for dogs. If not treated timely, the bladder can burst to spread poison in the whole body leading to death. A few species of dogs namely bulldogs, beagles, pugs, etc. are genetically predisposed to stones in the bladder.

Can almonds cause allergies?

When feeding your pet with nuts like almonds or any other, keep a close check on how its body behaves to the ingested nut. Because if your dog is allergic to these nuts only one is enough to cause adverse allergy reactions. If you observe any such signs such as sneezing, coughing, shortness of breath, etc., rush towards the vet.

Can your pup get aflatoxin poisoning from almonds?

Aflatoxin is a toxic substance produced by Aspergillus mold while destroying crops. It is found in nuts like pistachios, almonds, peanuts. It is not too harmful to humans; however, it can be dangerous for your friendly fellow.

It is advised not to leave the bag of almonds on the couch or table. If mistakenly it happened and your furry family member had swallowed it, you now need to look at the following symptoms:

In such a situation immediately see your vet for medication and further guidance.

Can I feed almond milk to my dog?

Almond milk is enriched with calories and is not recommended for consumption regularly. If you want to feed your pet with almond milk make sure it should not contain the ingredient xylitol. It is poisonous for dogs and can cause hypoglycemia which means low sugar level in the blood or liver failure leading to death.

You can feed your dog with almond butter but occasionally. Since nuts are rich in fats which can upset your do’s stomach. It is advised to limit your fellow’ roasted nuts intake.

Can I feed almond flour to my dog?

Almond flour is not toxic, gluten-free flour which is made from ground blanched and skinned almonds. It can be problematic to some of the dog’s treats not rising properly while baking.

Treats made with almond flour:

Nuts to be avoided:

Some nuts have a ton of health benefits but on the contrary, some are havoc on their digestive system. The following nuts should be avoided for dogs:

These are a good snack for humans. However, when it comes to your pooch, they are not suitable as they might have aflatoxin which can be deteriorative for his liver. Apart from this pistachio can cause choking hazards especially when not shelled. Read More

Any kind of walnut is not good for your little friend as they can cause digestive obstruction. Adding to the mixture, walnuts can be toxic. They contain a fungus called tremorgenic mycotoxins which can cause seizures and other neurological disorders.

Like pistachios, pecans consist of aflatoxin which can lead to liver damage and failure. They may contain juglone which is a kind of toxin that harms dogs.

These nuts do not contain any toxins. However, they can cause stomach problems and other gastrointestinal issues if ingested since they are rich in phosphorous and fats.

These are non-toxic to dogs. But are the fattiest nuts. These can cause a myriad of digestive issues to your pup.

Almonds are not good for consumption for your dogs. Though they are nutritious for humans. These nuts are not toxic however they are not easy to digest for your furry fellows. So, the answer to the question Can dogs eat almonds? It is simply a big NO. it is advised not to leave a bag of almonds on the couch. Even though all nuts are not dangerous to your four-legged friend but if consumed for long periods can lead to obesity.