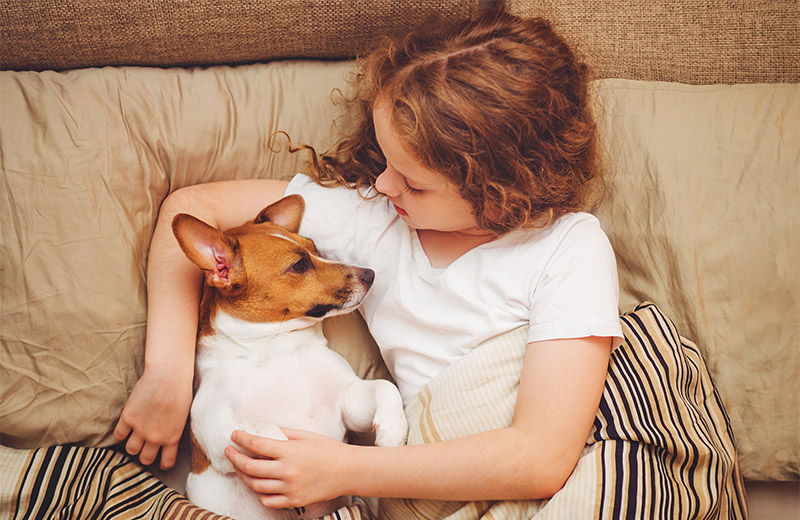 A dog is a domestic mammal and a carnivore animal. It belongs to the family Canidae. the dog can be called a close relative of jackals and foxes. It is as ever-present as cats. A dog has been a companion, protector, friend, and favorite pet of humans for more than 10,000 years. Characteristics like loyalty and affection of dogs are praised all over the world. Dogs were one of the first animals which were domesticated by humans. It has been the favorite hunting partner of man. In modern times, a dog is not just a pet or a hunting partner. But, it is serving humanity in many other places.

The ancestry of dogs goes back to the same ancestors of fox, wolves, and jackals. The doglike canids evolved from Miacis. With the passage of time, further evolution took place and dogs reached in their current state. Dogs share their evolution branches with wolves while other experts say that dogs share their evolutional branches with jackals. Regardless of the origin, all the canids have lots of common characteristics.

The details about the beginning of the domestication of dogs are not clear. However, shreds of evidence tell that humans started keeping dogs as pets almost 15000 years ago. Moreover, some other studies suggest that dogs were first domesticated in present-day Europe some 25000 years ago.  In ancient Egypt, dogs were considered sacred. Dogs are a part of old illustrations on walls that were found throughout the Middle East, Africa, Europe, and North America. These illustrations depict the value of the dog like a human companion throughout history.

Since ancient times, humans have been breeding dogs. At that time, the purpose of breeding dogs was to get a partner in hunting, herding, and guarding. Humans bred dogs in order to get the desired qualities in them.  Each breed of dog has its own unique physical traits. The most famous breeds of dogs are German shepherd, Golden Retriever, Bulldog, Beagle, Boxer, Pointer, Siberian husky, Australian Shepherd, Border Collie, and Bloodhound.

Though the life span of a dog is not the same for all breeds, an average dog’s life spans between 10-13 years. As a matter of fact, small dogs live longer than large dogs. Smaller dogs tend to live for 15 to 16 years. Moreover, large-sized dogs typically live 10 to 13 years. However, giant breeds usually live for 7 to 8 years.

Dogs can be safely categorized into the following seven types:

They help in hunting. Common examples are golden retriever and cocker spaniel.

These are small breeds. Common examples are Yorkshire terrier and bichon fries.

They are the oldest documented breed with non-sporting and working origins. Common examples are French bulldog and poodle.

They are the partner of hunters with a powerful sense of smell and great speed. Common examples are greyhound and beagle.

These are active small and fearless. Common breeds in this type are jack Russell and west highland white.

They are not just pets. They assist humans in farms and wars. Great Dane and boxers are common examples.

They help in controlling grazing animals. Sheepdogs and collies are common examples.

Although dog size ranges from a tiny poodle to the giant Great Dane, genetically and even anatomically, they are the same. Dogs have 78 chromosomes (39 pairs). Their normal body temperature is 101 F.

Dogs have two sets of typically high-crowned and pointed teeth, which are the specialty of carnivores. Dogs rarely chew the food; they gulp the food most of the time. Their digestive system resembles the human digestive system.

Dogs have 319 bones in their bodies. Dogs are running animals and their skeletal is designed in that way. The construction of pelvic and shoulder bones help them in moving, running, and galloping easily.

Dogs have the same five senses as humans. Especially their sense of smell is incredible. Dogs can track missing persons and trace toxic substances that cannot be tracked by the human nose. All not all dogs have the same great sense of smell. Bloodhound and German shepherd have better smell sense than other dogs. In comparison to humans, dogs have poorly developed taste sense.

The color of the fur coat in dogs is a clear identification of different dogs. Different breeds carry different lengths of hair. There are three types of hair in dogs: short (pointer), medium (Siberian husky), and long (Maltese). This coat is to save the skin from the environment but a lot of pet owners keep grooming this coat to enhance the beauty of their dogs.

In dogs, sexual maturity occurs between 6 months to 2 years of age in both, males and females. The gestation period in dogs is 63 days. There are three trimesters in that gestation period. Each trimester is of 21 days. It is interesting to know that cats have almost the same gestational period.

Although dogs are carnivores, they are not obligate carnivores like cats. They have adapted to the omnivorous diet. The diet of your dog must consist of a good balance of meat and plants. The nutritional needs of dogs vary as per the king of breeds. Moreover, dogs need a different amount of food at different stages (puppy, adult, pregnant, senior) of life. As a pet owner, getting worried about the nutrition of dogs is not unlikely. The nutrition of the dogs ensures their overall well being. Here is a list of human favorite foods, which are liked by dogs also.

Although dogs love a lot of human food items, they have a different digestive system. Thus, dogs cannot consume and digest all items of human nutrition. Some human foods that can result in serious health hazards in dogs are avocado, cherries, chocolate, coffee, grapes, eggs, alcohol, etc.

Fruits and vegetables which are good for dogs?

Fruits and vegetables that are suitable for dogs are listed below:

Fruits and vegetables which are bad for dogs?

Whereas, there are certain fruits and vegetables that have hazardous effects on the health of dogs such as:

Like all other living beings, dogs fall sick and recover. In some cases, if the dog falls prey to a lethal disease, the pet owner can lose his favorite pet. Some of the most common diseases are as follows:

The symptoms are vomiting, coughing, fever, paralysis, and runny eyes. It is also called hard pad disease because the dog’s nose and footpads get hard in this disease. Canine distemper is a contagious viral disease. Vaccination on time and distance from sick dogs can save your dog from this painful disease.

The symptoms are weight loss, coughing, respiratory problems, and lethargy. Heartworms are parasites. They live in the heart, blood vessels, and lungs of dogs. Mosquitoes introduce these worms in the body of healthy dogs.

The symptoms of this famous disease are pain, fever, tingling and burning in the wound, and hyperactivity. It is caused by a virus called the rabies virus. It spreads through the bite or the saliva of the infected animal. Unfortunately, there is no treatment for this fatal disease.

The symptoms are heavy coughing, lethargy, and gagging. It is a contagious respiratory infection. In this disease, the airways of dogs experience irritation and inflammation. Resultantly, it spreads in closed spaces by direct contact with infected animals. Usually, antibiotics are given to the dogs for the treatment of this disease.

The symptoms are fever, lethargy, dehydration, jaundice, and vomiting. It is caused by Leptospira bacteria (found in soil and water bodies like lakes or rivers). Moreover, it transfers from sick dogs to healthy ones through direct contact and sharing food or bedding.

The symptoms are vomiting, loss of appetite, weight loss, increased thirst and urination. According to research, one in every ten dogs can have a renal disease. As a matter of fact, kidney-related diseases are more prevalent in older dogs. Mostly, renal disease cannot be cured but the progression of the renal diseases can be slowed down.

Why humans and dogs are best friends?

Domestic dogs are also called “Man’s best friend”. This title is earned by dogs after the thousand years old close relations. There is a mutually beneficial relationship between man and dog. Furthermore, the dog has not been a pet only, for man, it has been a companion, helper, protector, and helper in certain activities. The presence of dogs steals all the worries of humans. Dogs are kind, loyal, and understanding animals. They have helped humans in so many aspects such as preventing possible crimes, saving lives, and detecting drugs and bombs.

Interesting similarities between dogs and cats:

How to train dogs?

Proper training is one of the bad needs of pet dogs. Avoiding training because of the cost is a grave mistake. One can train a dog at a low cost by following simple techniques. For example, take advice from experienced dog owners or visit the nearest library and read books about training dogs. Toys stimulate the mental capabilities of dogs, save money by investing in long-lasting toys such as Kongs and Buster Cubes. Moreover, go on walks with the dogs and do exercise with them. In addition to that routine is very important to maintain a routine of the dogs. Lastly, teach your dog about basic commands like sit down, stop, wait, stop barking, go to your place, drop it, etc.

Why do dogs have wet noses?

Having a wet nose help dogs smell well. In addition to that, the moisture in the nose helps dogs in evaporation of heat and cool down their bodies.

Why do dogs walk in circles before lying down?

It is a habit from the time when the ancestors of dogs used to live in the wild. They walked around a spot to stamp down leaves, grass, snow, etc. Eventually, it was like creating a nest-like a place to have a peaceful sleep.

How many teeth do dogs have?

How many breeds of dogs are there?

There are 340 dog breeds all over the world but the many Pets Clubs acknowledge 192 breeds only.

Why do dogs lick people?

Dogs lick people in order to show bonding and affection with them. Moreover, they lick humans to get attention.

The affection and loyalty of dogs are hard to find in any other animal. The friendship of man and dog is thousand years old and most probably it will stay till the dawn of doom’s day. Spend time with your pet and forget about the temporary tensions. The tension will go away one day, but the bond between you and your dog will stay till the death do you apart!